Valero and Tesoro are known as the biggest oil companies in California. They have spent large amounts of money on the Proposition 23 campaign, Valero with $4,050,000 and Tesoro with $1,525,000, in hopes of passing the Proposition, which would suspend the Assemmbly Bill 32, the Global Warming Act of 2006, until unemployment drops to 5.5% for 4 consequtive quarters. Valero's stand is that the California's Global Warming Act will only cause more lost jobs for California and therefore should not be allowed. Supporters of the California Global Warming Act stress the importance of understanding the Tesoro's and Valero's real priorities, money. Although California's economy is at in trouble, the health of citizens and green industry is a more pressing issue. California will make the desicion on what is a bigger priority for them; a temporary increase in industry activity or the quality of air, health of the citizens and future of the green industry?

Here is a chart of the different amount of money companies had contribute on Proposition 23. As we can see Valero and Tesoro have contributed the most out of all companies. 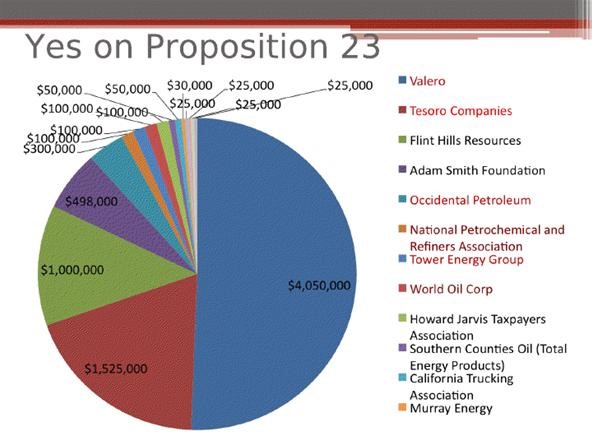 Want to master Microsoft Excel and take your work-from-home job prospects to the next level? Jump-start your career with our Premium A-to-Z Microsoft Excel Training Bundle from the new Gadget Hacks Shop and get lifetime access to more than 40 hours of Basic to Advanced instruction on functions, formula, tools, and more.

Other worthwhile deals to check out:

Join the Next Reality AR Community

Get the latest in AR — delivered straight to your inbox.